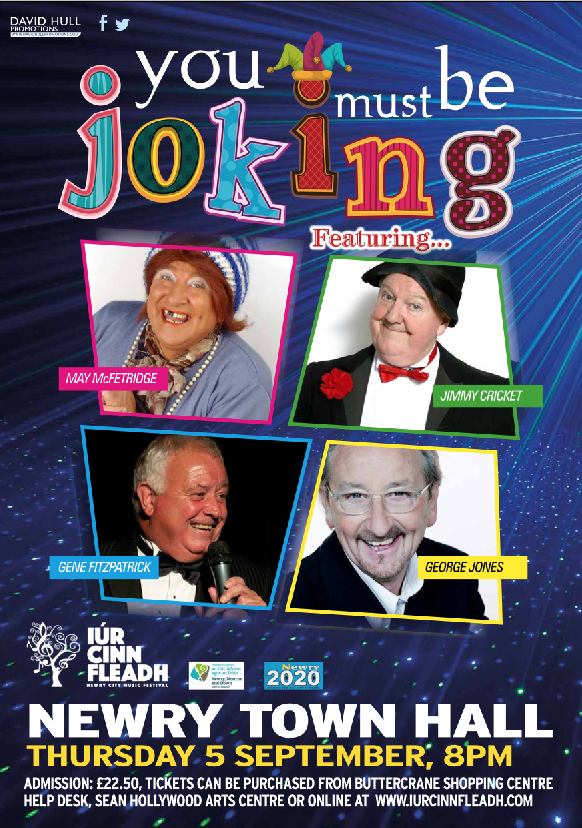 Four of Ireland’s most enduring comedy acts are teaming up in a tour de force to open Newry’s annual Iúr Cinn Fleadh with a smile. George Jones, May McFettridge, Jimmy Cricket and Gene Fitzpatrick will present You Must Be Joking at Newry Town Hall on 5th September.
George Jones is said to be one of Northern Ireland’s most accomplished all-round entertainers. He is a TV and radio presenter, comedian, musician, singer and after dinner speaker. George began his career as a member of the Monarchs – which included his boyhood friend Van Morrison. Scooping the prestigious Sony Radio Award for best regional radio presenter, George has continued to combine mirth with music.
Northern Ireland’s ‘Queen of Comedy’ May McFettridge has notched up 30 years in her various roles from hilarious housewife to pantomime dame. A bronze bust of her sits in pride of place at Belfast’s Grand Opera House. May is the creation of former car mechanic John Linehan. He rose to fame as the plain-speaking, gap-toothed character after media celebrity Eamonn Holmes had asked John to phone his then radio show, to liven up the programme.
Jimmy Cricket was born James Mulgrew in 1945 at Cookstown. He ploughed through a variety of jobs from working in a betting shop to being a Butlin’s Redcoat. Jimmy won LWT’s talent contest Search For A Star, and snatched his own series on Central Television. He featured in the Andy Williams Christmas Spectacular which toured from London’s O2 Arena to the Harrogate International centre. Jimmy’s charity work earned him a papal knighthood in 2015.
Gene Fitzpatrick has become a household name with a string of album successes and a reputation as one of the funniest comedians in the country. In recent years, Gene has re-invented himself. Clubland is in the past and the corporate sector is now where you will find him – delivering after dinner shows to prestigious clients across these islands. Gene has served as compere at shows with singers Chris de Burgh and Tony Christie.

Tickets for You Must Be Joking cost £22.50 each and are available from

http://www.iurcinnfleadh.com/product/you-must-be-joking-thursday-5-september-2019/Sean Hollywood Arts Centre and Buttercrane Help Desk. Please note – tickets are available for a limited time for the Early Bird price of £20.